The DPF Regeneration Oven is designed to facilitate the cleaning process of dirty filters. In some cases a filter may need to be baked due to amounts of wet soot, unburned hydrocarbons and must be baked in order to regenerate the soot to ash that cannot be effectively removed with EB-9002 DPF Regeneration Oven. EB-9002 controller is programmed to ramp up the temperature at a rate that will not damage the substrate of the filter. With the Ovens “smart technology”, it will monitor the DPF during the regeneration process making sure there is no uncontrolled regeneration to the filter. As the oven temperature increases the DPF will start its own regeneration process. If the temperature gets to high from the regeneration of the DPF the oven will “pause” until the DPF temperature drops and has stopped its own regeneration. The oven will then continue its cycle until finished. 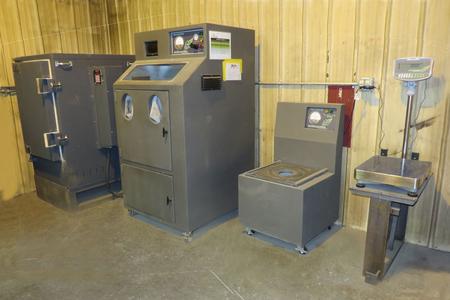 Thank you for contacting us! If needed, you will hear back within 48-72 hours.
The Time Bomb Under Your Truck

What is a DPF?

Our state of the art Diesel Particulate Filter cleaning system uses what we call “Dual Force” technology where compressed air and intense vacuum is used simultaneously to push from the top and pull from the bottom to force the contaminated soot from the filter cells. The EvacuBlast has a built in pressure differential test system to evaluate the filter before, during and after the cleaning process is completed. Each filter has a different “flow pattern” on where the exhaust enters the DPF while working on the vehicle. These flow patterns usually create more soot concentration in specific areas of the DPF. We call this “gum ball”. Our system allows us to work on that “gum ball” area until clean where other automated systems can’t recognize the problem area and pass over. With the combined compressed air and intense vacuum working in sequence, there is no other DPF Cleaning System that will clean a Diesel Particulate filter the way this system can.

How does your DPF System work? This may seem fairly elementary, especially if you have been driving diesels for awhile but for those of you who aren't sure, a DPF system is designed to remove up to 100% of the soot that your truck generates during regular operation. It does this by running your exhaust through a filter before releasing it into the atmoshpere. While this seems to be a great idea, there is much more to the story.

Once your DPF filter has reached a certain capacity for soot it attempts to burn it all off. To do this your engine runs in a way that elevates exhaust gas temperature in conjunction with an extra fuel injector in the exhaust stream that injects fuel to react with a catalyst element. Ultimately, all of the soot that is collected by your DPF system is turned to ash which is stored in your filter.

After time, the DPF gets so full of ash, your truck is working extra hard to get the exhaust out, not only this, but your truck is constantly trying to burn the soot out, but it's not soot giving you the problems, it's the ash that has accumulated. This is why it's so important to get the ash out, it will restore your mileage and power and lower the risk of damaging your engine.